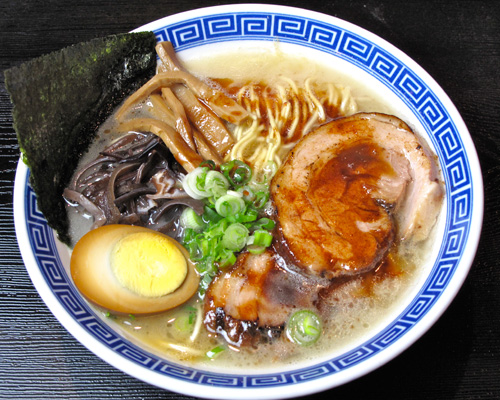 At the age of 20, Shigeto Kamada traveled to Hokkaido and was inspired by Asahikawa’s rich Shoyu ramen and Sapporo’s authentic Miso ramen. He was amazed by the uniqueness of Soki Soba in Okinawa when he was 21.

Shigeto moved to Tokyo, and he was blown away by the mouthwatering cloudy and rich taste of the ramen there, and he had to eat twice a week. He kept on devouring Keika Ramen until he moved to New York City at the age of 28.

After moving to New York City in spring of 1981, he was unable to find authentic noodles and craved for ramen. In summer of 1997, his Jazz Band went on a tour in Japan and he simultaneously began searching for famous Japanese ramen shops all around Japan. He traveled to various places while touring and ate ramen such as Kumamoto Ramen, Hakata Ramen, Kurume Ramen, Nagasaki Chanpon, Wakayama Ramen, Kyoto Ramen, Toyama Ramen and many more. It was as though he was on a Gourmet Ramen Tour for six years.

After a day after returning to New York City on September 10th, 2001, he heard a catastrophic roaring sound coming from the window and he realized that his life was crumbling as he lost a source of income except his music. He began his late-night ascetic training in October at his friend’s restaurant. He had no qualms about cooking. The 20 years that he spent reading ramen Books and watching Ramen Shows in his apartment urged him to perfect his ramen more and more, and he was rather excited to serve his ramen to customers.

After eight months of ascetic training from October 2001 and thoroughly hammering out a business plan, Shigeto opened his one and only Minca in June 2004. The broth is made from vast amounts of pork bones and chicken bones, and emphasizes on hearty Japanese taste by using seaweed, dried bonito, and dried shiitake mushrooms imported from Japan. He also obtains miso from Sendai and Shinshuu to create an unique and robust miso ramen. Shigeto spent most of his time developing ramen to serve wide selections of delicious ramen to his customers.